Autocross, also referred to as Auto-X or Solo, is a motorsport in which someone races their car through a cone course with the goal of getting the best time without hitting cones. Autocross provides a very easy and simple learning experience in a safe and affordable manner. In a typical road racing format, there would be multiple cars out on the track at a time, but with Autocross you typically only have one person racing at a time, or a few in larger courses that don’t cross over other points of the track. Road course usually results in hitting over 100 miles per hour frequently in a quicker car, but autocross (depending on the course) typically keeps maximum speed around 60, with most of the time spent around 30-50 miles per hour.

Depending on where you’re racing, who’s hosting it, and what rules they’re abiding by, it can vary quite a bit. Some local car clubs might put together an autocross event and make up their own rules around car classing, cone penalties, and car safety. Most autocross events abide by the SCCA National Solo rules which I’ll discuss later in this post.

Autocross is built around cones. They are the guiding force in this motorsport. Typically autocross is setup in a giant parking lot and the course is directed through orange cones. To direct cars as to where to turn, pointer cones (cones laying on their side) are setup saying “GO THAT WAY” around a standing cone marking the edge of the track. The picture below of me shows this. I am going to drive around the standing cone on the side where the pointer cones are pointing. 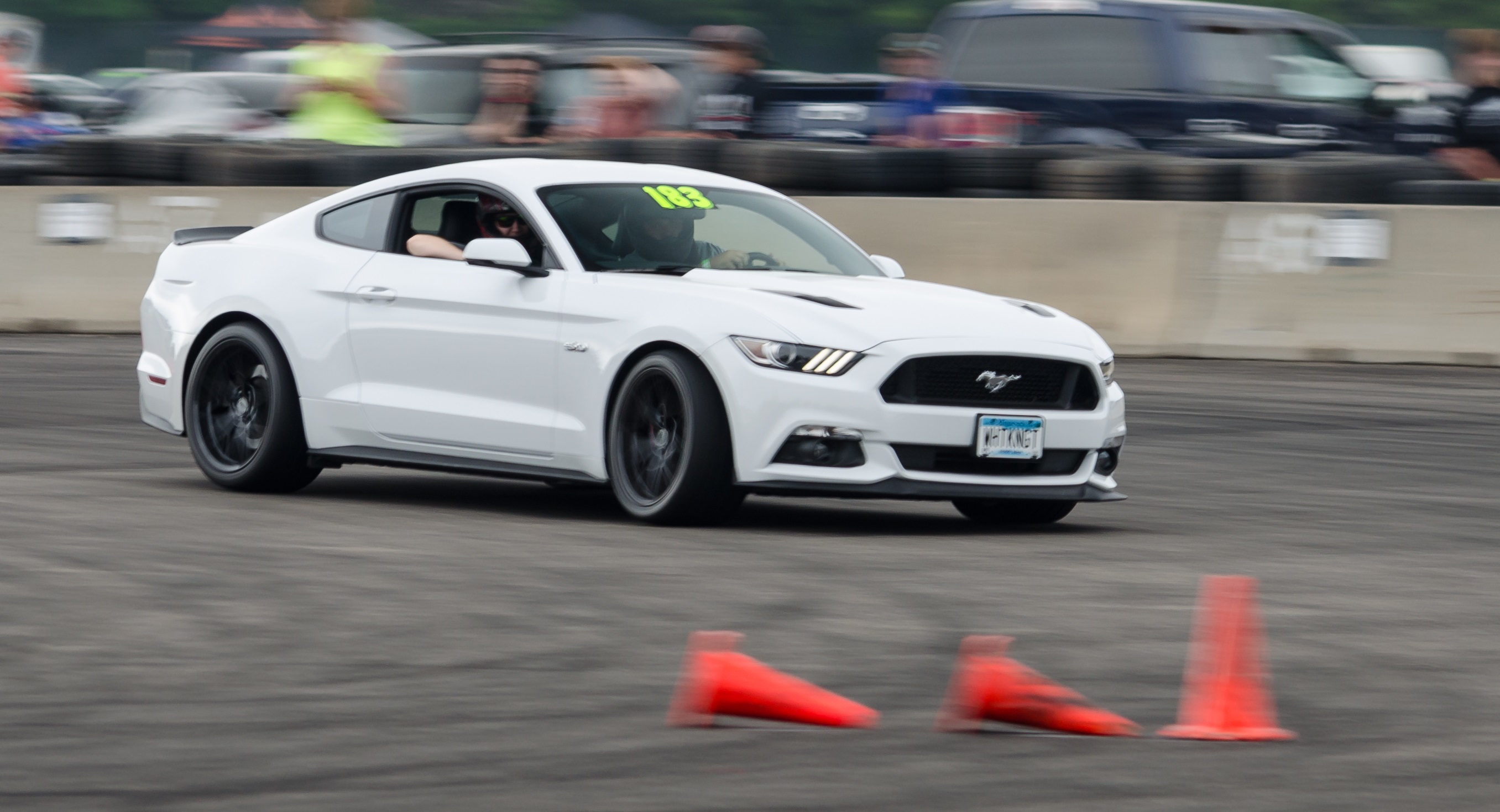 In general, every autocross event will implement a cone penalty. Whenever you knock a cone out of its box, or tip it over, will result in a 1 or 2 second (typically 2 second) penalty to your time. Autocross courses are designed so that it will never be advantangeous to intentionally knock over a cone to get a better lap time. You can hit the cone and not get penalized if the cone remains standing up and any part of the cone remains inside of the dedicated box. The image below shows this well. 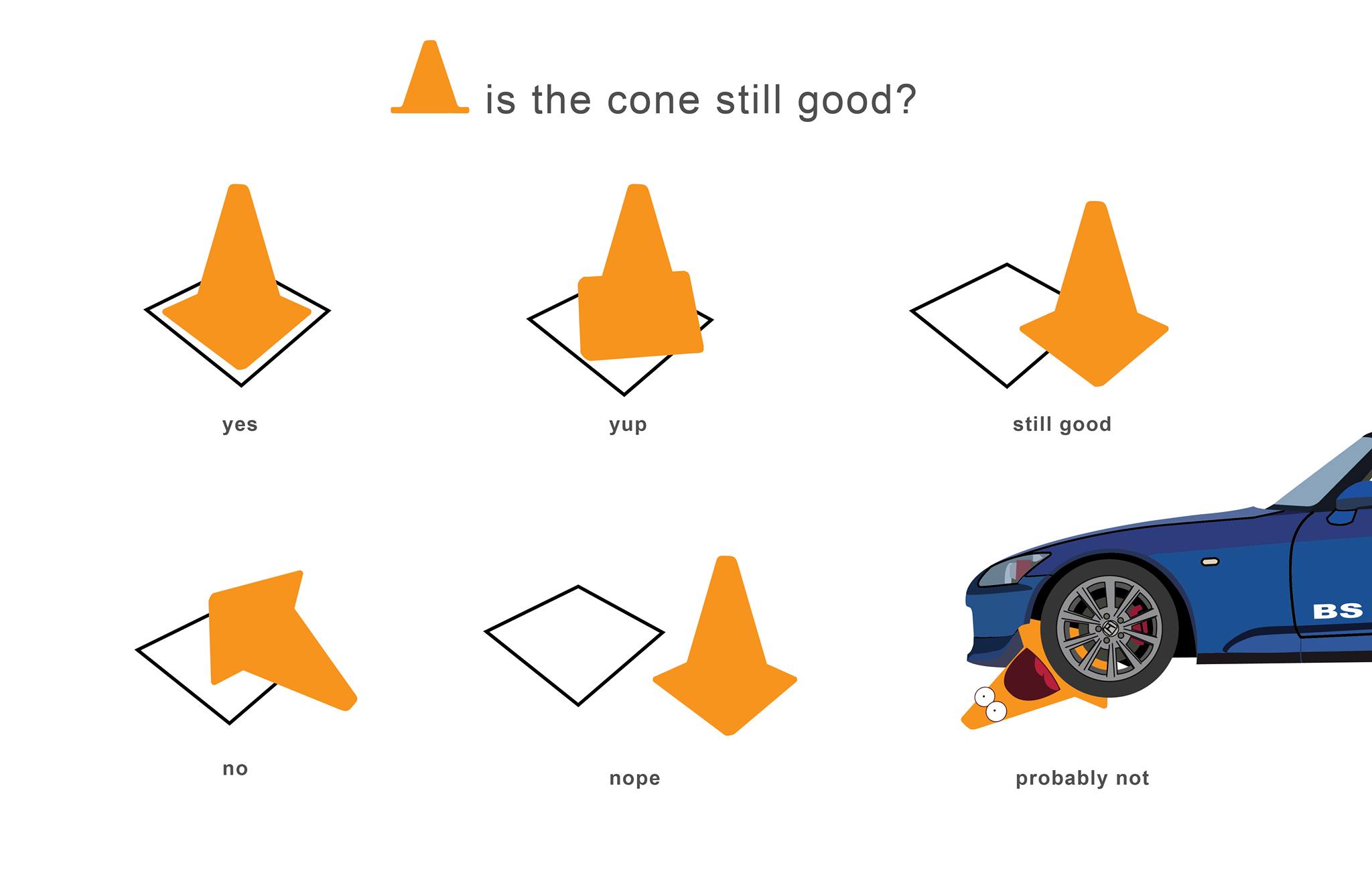 You can also DNF (Did Not Finish) by driving on the wrong side of the cones, or missing a cone gate. This will result in your time not counting for that specific run.

This is another rule that is dependent upon the host of the event. Some events create their own rules around what car competes against another car. It’s not fair if a McLaren 720S is put up against a stock 2002 Honda Civic Si, so typically these cars are put into different classes. Some events organize classes by number of cylinders in an engine, tire treadwear rating, and other various factors.

The most commonly used car classing rules are those posted in the SCCA National Solo rulebook. These break down cars into a large variety of classes, from stock cars to go karts and everything in between. I won’t go into depth as the original rules are extremely lengthy, but as an example my 2015 Mustang GT in stock form would be in the F Street (FS) class. This class also contains stock cars like a 1992 Toyota Supra and an Infiniti G37 coupe/sedan. Within the street class, you’re allowed to have up to a 200 treadwear tire (can’t have a 180 treadwear as an example) or you’d be placed in a much higher class. There are other basic modifications allowed to remain in this class. My car is modified past F Street rules, so I run in a higher class with more equally competitive cars.

Again, mostly dependent upon the event organization and what rules they abide by. Each car needs to go through a basic tech inspection that makes sure the wheels won’t fall off, the brakes work, the battery is secure, and there’s no other satefy hazards. You also need a helmet that likely will need to be Snell 2010 rated or newer. Some events have helmet rentals, but be sure to check first if you don’t have one.

This deserves it’s own segment. The SCCA National Solo rules are usually the law of the land as far as autocross goes. This documents rules around noise regulations, passengers being allowed or not, car classing, and everything else. It’s modified every year and updated for new cars, as well as moving cars around to different classes depending on nationals results. It’s quite lengthy, so I don’t recommend trying to read it all, but as you progress through autocross and want to try compete and win up to the national level, you need to know and understand this rulebook.

Here’s an example of me racing in autocross in my Mustang GT. This gives you a good idea of how it works.